Fudge & Caramel take shape and you can see the filling 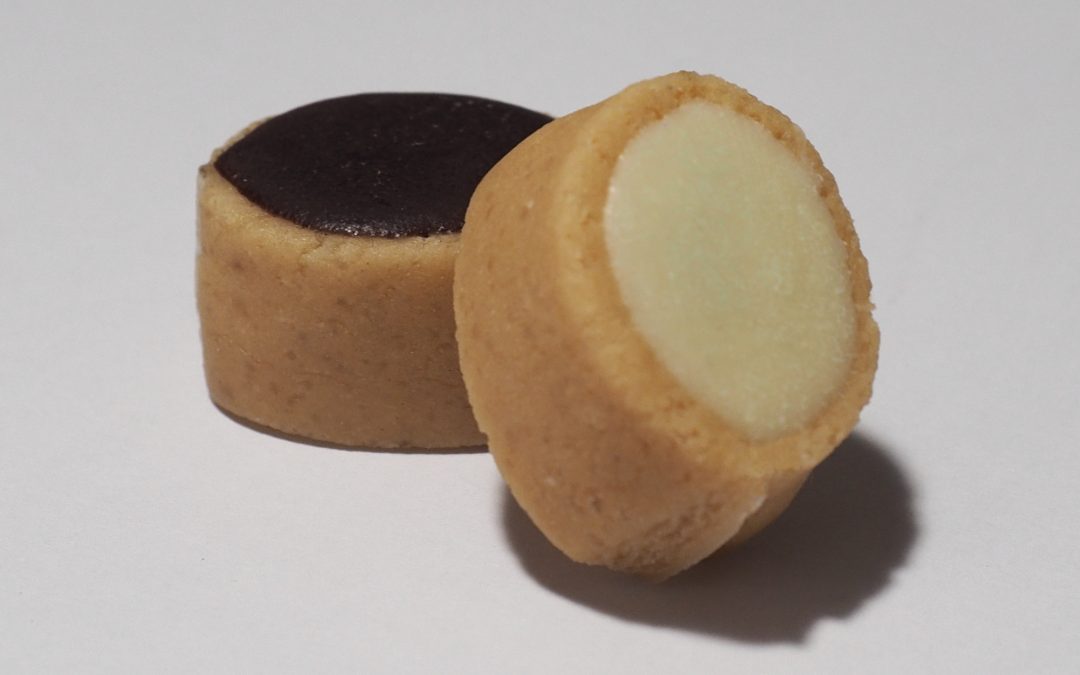 The name “Fudge” covers a wide range of products, which are basically a combination between … a toffee and a fondant.

Fudge is made by boiling sugar in milk to the temperature when sugar syrup dropped into cold water will form a soft, flexible ball, typically around 130 – 133°C and then beating the mixture while it cools, so that it acquires a smooth, creamy texture.

Normally a fudge will contain more sugar than a toffee, but the composition can vary between very wide limits.

Most stories claim that the first batch of fudge resulted from an accident with a bungled (“fudged”) batch of caramels, when the sugar was allowed to recrystallize; hence the name from the interjection, “Oh fudge!”

These products are part of the tradition and can be mainly found in North American and North European countries.

Traditional fudge products on the market are solids without filling. They’re usually formed with cutters and always shaped as a cube or parallelepiped; formats that are not so appealing. 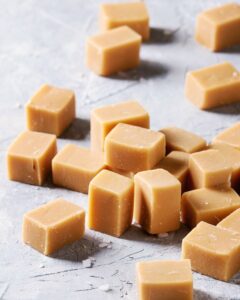 Or you could find the caramel version formed and with the possibility of having a central filling. 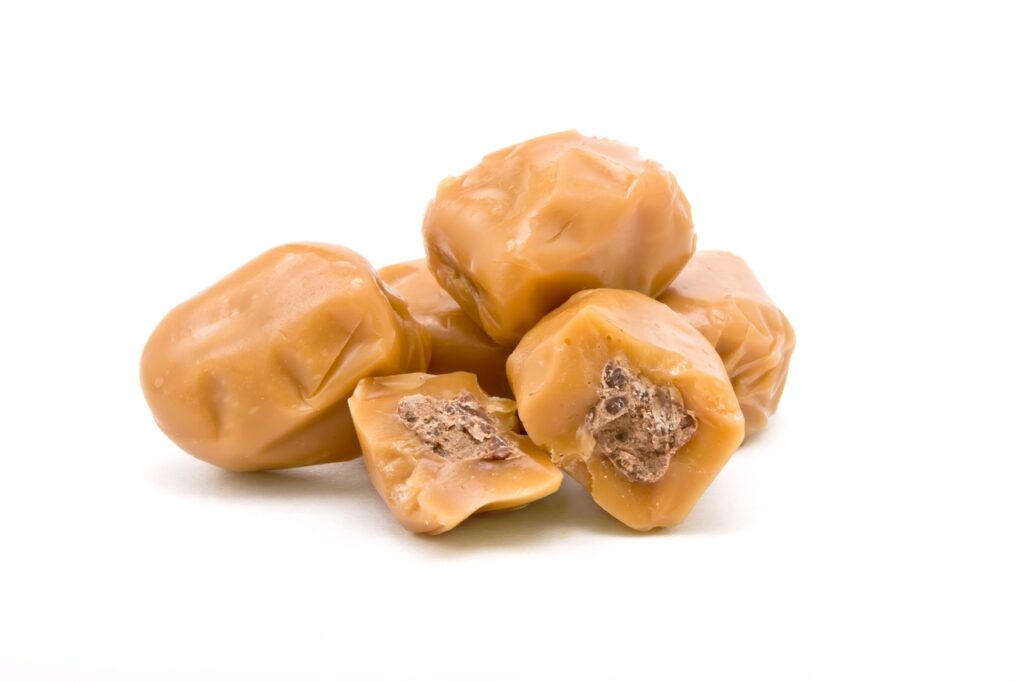 In this case, the match with a filling amplifies and enhances the classic and delicious taste of these products (thanks to the presence of milk and sugar), so that the final consumer can perceive them as high-quality products.

By using the chain-forming system, it is generally possible to reach a dense filling of even 20-25%.

A high percentage of filling may not be enough to stand out from the competition (in a market populated by both industrial and craft products, each with its own distinctive features).

So, we wondered how we could take these products to a higher level.

How to develop the classic product into a “premium” target, which could be possibly compared to pastry?

The limits of this type of product are essentially:

When you can see the filling

Although we can put a large amount of filling inside a chewy soft candy, there is a natural barrier that hinders its perception: the outer shell. 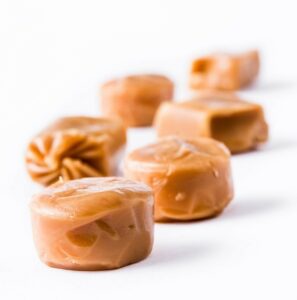 The fudge or caramel cover – that surrounds and protects the filling – also represents the greatest obstacle to its view and therefore to the immediate perception of a premium product.

What actions can we take to enhance the presence of the filling inside the candy? 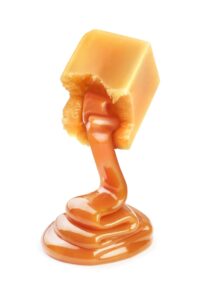 In order to meet the need for new presentations of filled products – and to create an added value immediately perceivable by the final consumer – we have developed a new forming system that makes the filling visible as in a candy cup. 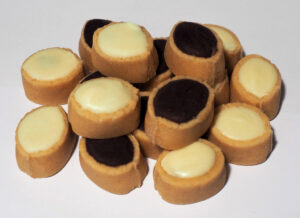 Our innovative and unique chain system can realize products with a greater amount of filling, which is also immediately visible. This makes the products more inviting and amplifies their appeal.

The candy cup allows to reach a filling up to 30% of the total weight of the product:

View of the candy cup in section: in brown the fudge or caramel structure; in red the filling.

You can also get multiple combinations with different types of filling, such as liquid, cream, pectin, powder and solids geometrically regular, layered or side by side.

This new possibility opens the scenario to different and multiple combinations of tastes, between the external shell and the milk, creamy fillings such as:

When the fudge takes shape

Further to the visible filling, you can also give a new shape to the excellence of your products; all this, thanks to the new technology developed by Nuova Euromec.

We can overcome the limits of traditional products (in the form of cubes and parallelepipeds), which do not transmit any originality, with the risk of getting lost in the multitude of products all equal and conformist.

The innovative forming system allows maximum flexibility in the production of different shapes and their quick change in a few minutes. 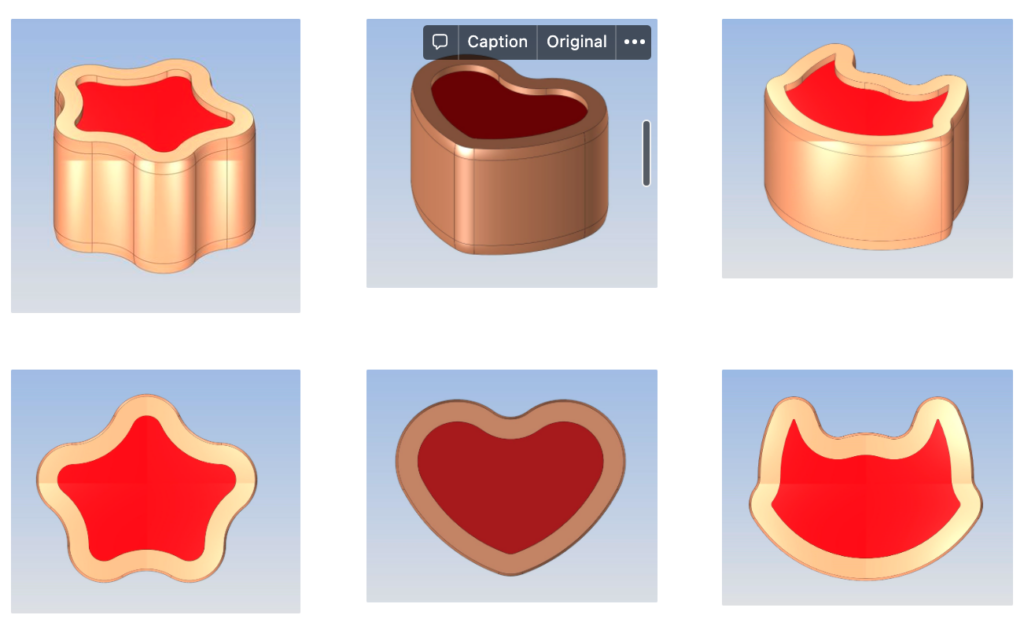 Moreover, the mass of fudge or toffee that forms the external structure of the candy cup, can be produced in bicolor, thanks to the use of the double batch roller, for combinations such as milk + vanilla or cappuccino.

A new generation of gourmet fudge

But the real plus of this new candy technology is the possibility of having the filling in evidence.

You can immediately notice the difference between a product such as the filled candy cup and a traditional product (with or without filling).

The filling is visible and ready to be tasted…

A new generation of fudge and caramel, ready to land on the market to amplify the qualities of these products, already recognized for their traditional rich taste.

Products that can be manufactured with a forming line that has different benefits – if compared to traditional caramel and fudge production systems:

Nuova Euromec can provide its innovative technology and laboratory at your service, to shape your gourmet ideas.

Thank you for your attention and for your time!